Golden Ratio is quite dear to the hearts’ of scientists and mathematicians. As Wikipedia summarizes it brilliantly, people from all backgrounds have been fascinated with the golden ratio throughout history:

“Some of the greatest mathematical minds of all ages, from Pythagoras and Euclid in ancient Greece, through the medieval Italian mathematician Leonardo of Pisa and the Renaissance astronomer Johannes Kepler, to present-day scientific figures such as Oxford physicist Roger Penrose, have spent endless hours over this simple ratio and its properties. But the fascination with the Golden Ratio is not confined just to mathematicians. Biologists, artists, musicians, historians, architects, psychologists, and even mystics have pondered and debated the basis of its ubiquity and appeal. In fact, it is probably fair to say that the Golden Ratio has inspired thinkers of all disciplines like no other number in the history of mathematics”

Golden Ratio for iPad is a cool application that brings this ratio to your photos in a visual way. It lets you explore photos and play with grid, line, and Fibonacci spiral shapes on your own photos. We have known for quite some time that Golden Ratio proportions can be found in nature and top tech products such as the iPod. With this app, you can see it with your very own eyes. You can easily import your own images to get started. The sample projects included are nice to have too. 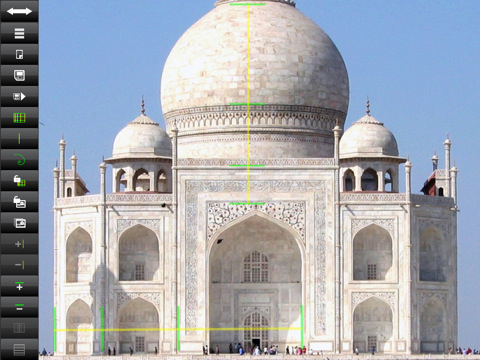 Creating and saving your own projects is straight forward in this app. You can export your projects as an image. Basic image interactions are supported too (flip, zoom in, and so on). You do have the option to increase and decrease your grid’s size if you wish. 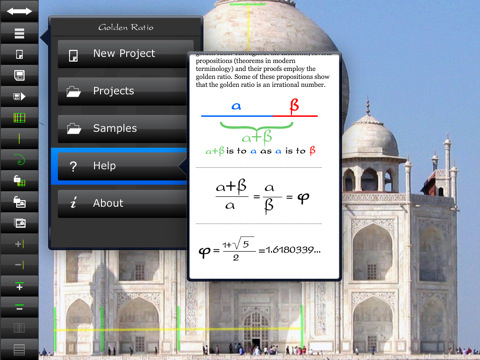 All in all, Golden Ratio for iPad is a fun app to play with for those fascinated with this ratio. You do not have to be a Math genius to figure out how this ratio applies to your images. It is a great tool to amaze others with. Overall, this is a pretty solid application and does what it promises.